​Seeing the beautiful buildings that comprise St. Andrew’s Episcopal Parish today, it is interesting to know that the earliest services were held in a railroad depot in the center of town!

In 1892, the Diocese of Florida was divided in two, and the Missionary District of Florida was born. Bishop William Crane Gray was charged with leading the new southern district, which was then largely wilderness, and would be virtually unrecognizable today. Bishop Gray traveled by freight boat, train, and mule throughout the district to serve his people, including those living on the mainland and the small barrier islands off the west coast, as well as the Seminole Indians living in the Everglades. He founded missions in many locations, and first visited Boca Grande in 1908, purchasing two lots for a future mission. Those lots would later be swapped for the present site of St. Andrew's at the corner of 4th Street and Gilchrist Avenue in the Village.

Bishop Gray held the first service at Boca Grande on the evening of March 21, 1911 in the waiting room of the train depot. He records in his diary,

“At 7:30 p.m. had evening prayer and preached in the waiting room at the depot, which was loaned for the occasion. All who could crowd in were there, and many on the outside. I raised the tunes, and the singing was hearty. It was an inspiring service. Great improvements are going on, and I believe Boca Grande has a future before it.”

St. Andrew’s was formally listed as a mission of the Episcopal Church in 1912 and was also recorded at that time as owning a church building. That building, very likely one of those constructed to house railroad workers, was moved in 1916 from its central location in town to its current address.

Bishop Gray’s final service took place in 1914, but the seeds of growth had been sown. Seasonal rectors were hired beginning in 1961, and a full-time vicar was first hired in 1971.

The St. Andrew's vicarage next to the church was purchased in 1971 to provide housing for a year-round vicar, and a 20-foot extension to the church was added in 1980 to increase seating to 132.  In 1988, organ builder David Moore and his artisans from Vermont built and installed a tracker (mechanical action) pipe organ under the watchful eye of Fenner Douglas, renowned professor of organ at Oberlin (OH) Conservatory.

St. Andrew's property also includes a Memorial Wall and Garden, where ashes of loved ones may be interred.  Designed in 1997, it was the inspiration of parishioner Anne Wright.

The three connected buildings present an appealing landscape of casual island elegance, the result of the practiced eye of preservation architect Hank Browne, a parishioner and former Island resident. Working with Hank was our architect, Thorning Little, of Sarasota, FL, and general contractor, Safety Harbor Builders, a local firm.

St. Andrew’s Boca Grande continues to change and grow, committed to meeting the needs of its faithful people who gather to worship,  learn, and serve. 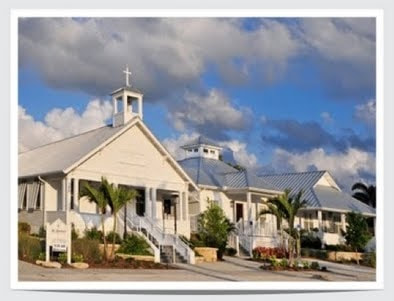