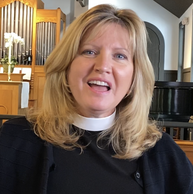 The Very Reverend Michelle Robertshaw, Rector
michelle@standrewsbocagrande.org
​
Mo. Michelle joined the St. Andrew's staff as Rector in August 2012, having previously served  St. Boniface, Sarasota and St. Mary Magdalene, Bradenton in the Diocese of Southwest Florida and Church of the Holy Family, Chapel Hill in the Diocese of North Carolina. She has been a parish priest 17 years, though she has worked in church settings for the past 24 years.

Michelle is a graduate of Virginia Theological Seminary in Alexandria, Virginia and completed her field education at St. Barnabas Church and School in Upper Marlboro. Prior to seminary, she was the Lay Chaplain for St. Mary's Episcopal School and the Director of Family Ministry for St. Mary's Church.

In 2019 she completed an immersion course in Documentary Film Making at Duke University and as part of her sabbatical project went on to interview the Most Reverend Michael Curry (the Presiding Bishop), Jan Karon (author of the Mitford series), Dr. Stanley Hauerwas (American theologian, ethicist and public intellectual), and the Rev. Dr. Sam Wells (Vicar of St Martin-in-the-Fields in central London, and Visiting Professor of Christian Ethics at King’s College London).

She is a current member of the Standing Committee of the Diocese of Southwest Florida, serves as the Dean of the Venice Deanery and has previously served on Diocesan Council. She has been invited to work on staff at the 2022 Lambeth Conference in Canterbury, England.

Michelle is passionate about serving all God's people - - children, youth, young adults, mid-lifers and seniors - - enjoys studying church history as a gateway to shaping the church's future - - loves going on pilgrimage - - and walking her dogs on the beach early in the morning.

Alan Jay Corey, originally from Mentor, Ohio, relocated to Sarasota after the blizzard of ’78.  He holds a BMus from Heidelberg College.  He has conducted over 120 musicals in Southwest Florida.  He has repeatedly been awarded "Best Musical Director" by Sarasota Magazine and the Sarasota Herald Tribune, and is included in Sarasota Magazine's list of most powerful people in Sarasota music.  For 10 years he was the artistic director for the Sarasota Youth Opera, coordinating, premiering and conducting new commissions and attracting international reviews.  As founder of the Florida Youth Chorus, the chorus collaborated and performed with the Sarasota Orchestra, Dallas Brass, the Moscow Boys Choir and others. His long association with St. Boniface Episcopal Church in Sarasota included conducting one of the only performances of Paul Halley’s Earth Mass outside of St John the Divine, and cantoring for the ordination of the Rev. Michelle Robertshaw.

He has served as pianist for the Florida Theater Conference, the SETC auditions, the Artist Series Concerts of Sarasota, numerous international ballet companies, countless benefits, was organist for the White Sox, and toured Italy as pianist for the Choral Artists of Sarasota at the Amalfi Coast Music and Arts Festival.  He is a founding member of Sarasota’s Key Chorale and Ring Sarasota.  Many of his voice students have performed on Broadway and around the planet.  Currently, he directs the Singers and the Harmonaires at the Glenridge on Palmer Ranch, and spends all of his spare time baking cookies.